Acknowledgment
Knowing that Makkah Holy city, has 2 different seasons for pilgrims, in each one the city will be hosting over 3 million visitor from every side of this world, I knew that for such complicated job we need a help! Joan Zalacain, a "wayfinder" recommended by The University of Reading, joined the team, with the support of Omraniyoun, a Saudi architecture firm, the team found his way through!
Later in 2017 the project was recognized internationally.
Main Challenges & Solutions
After we were briefed by the Saudi authorities about the needs, the conditions of the city and its people, and what they expect from the solution to provide, we started our research and data collecting, to discover the main challenges, which mainly are:
1. Seasonal lists of destinations
During the two seasons of pilgrimage (Haj and Umrah in Ramadan), each one has totally different destinations and interest. With a digital system using LCD screens built in the street totem we managed to develop an interactive system to change destinations remotely -according to seasons or emergencies- from one control room. 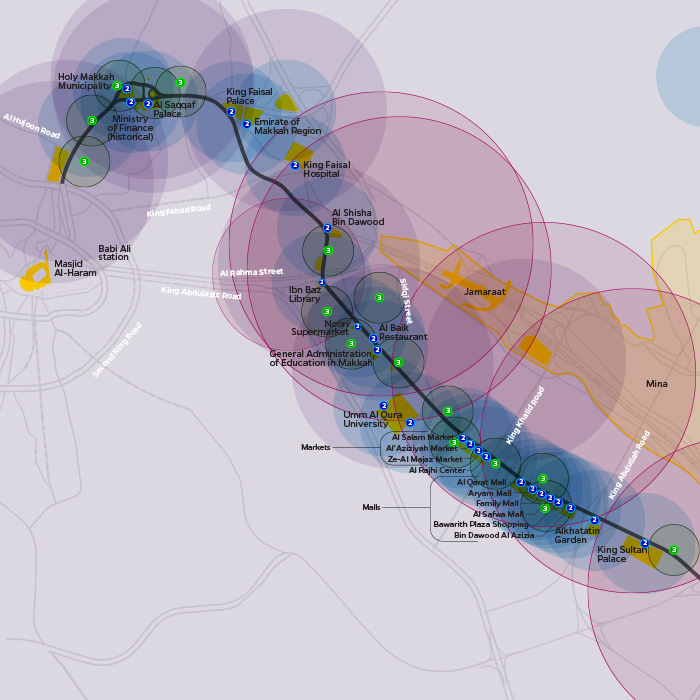 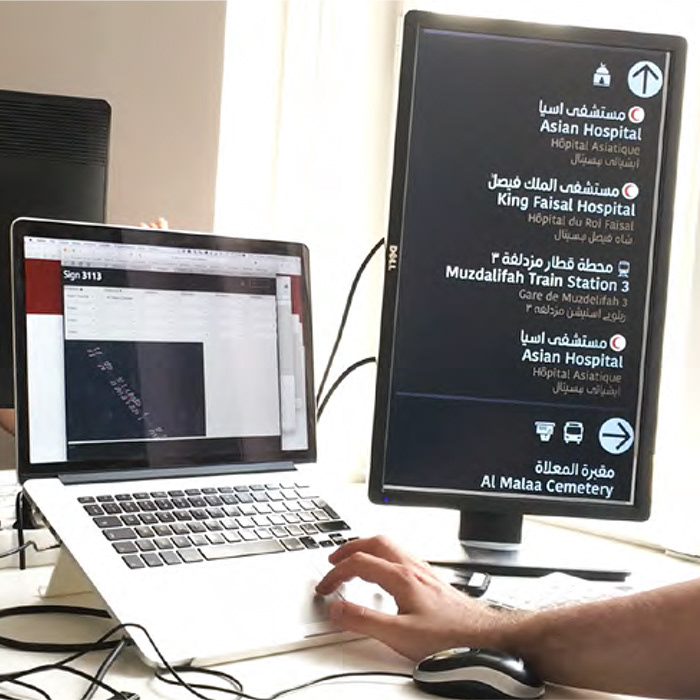 2. language diversity
Another challenge is that pedestrians from locals and visitors speak different languages. According to Makkah Urban Observatory, to cover 90% of the system users’ languages, the system should be using 6 languages: Arabic, Farsi, Urdu all in Arabic script, and English, French and Turkish using Latin script. With the interactive screens it became doable!
Sakkal's AwanZaman Arabic typeface, and Kohinoor for Latin script, were used after mock-up testing with many typefaces! 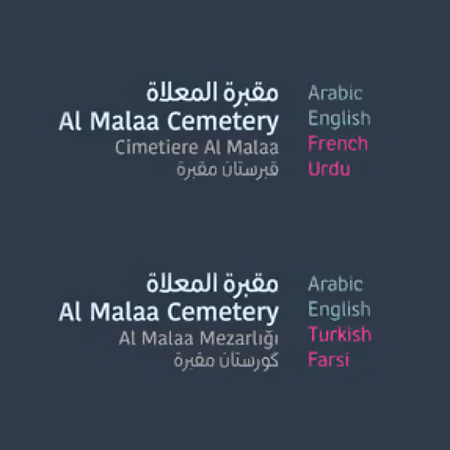 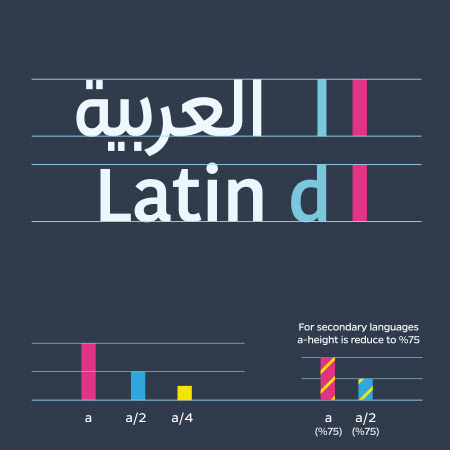 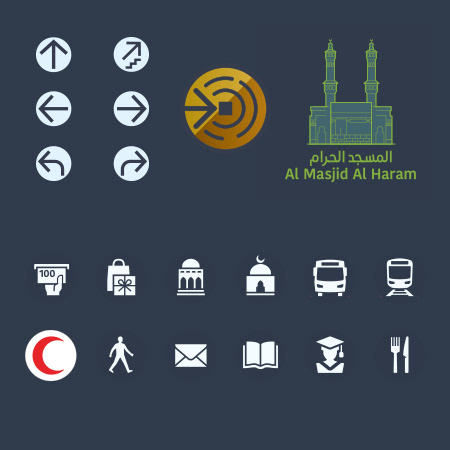 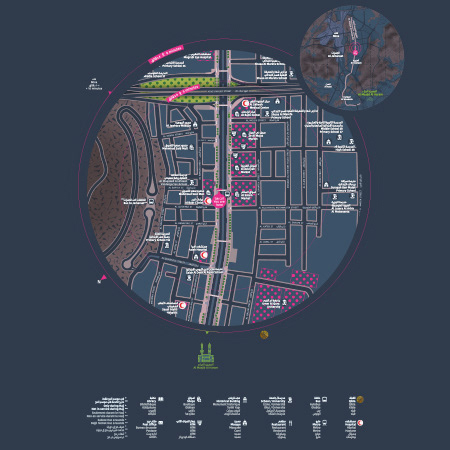 3. Harsh Climate
However, knowing that most of the year the daytime temperature will exceed 40 degrees. A ventilation system has been applied to the street totem so electronic components will maintain.
4. shiftable direction!
Finally, to excel in this project, we wanted the system to have two different geographical reference points, north and "qibla", the late is the actual location of Kaaba, and since it is located within the city, the direction will keep change on every signage. “Qibla” direction was also reflected on the maps and it was distinguished from walking route to Kaaba (the Holy Mosque). 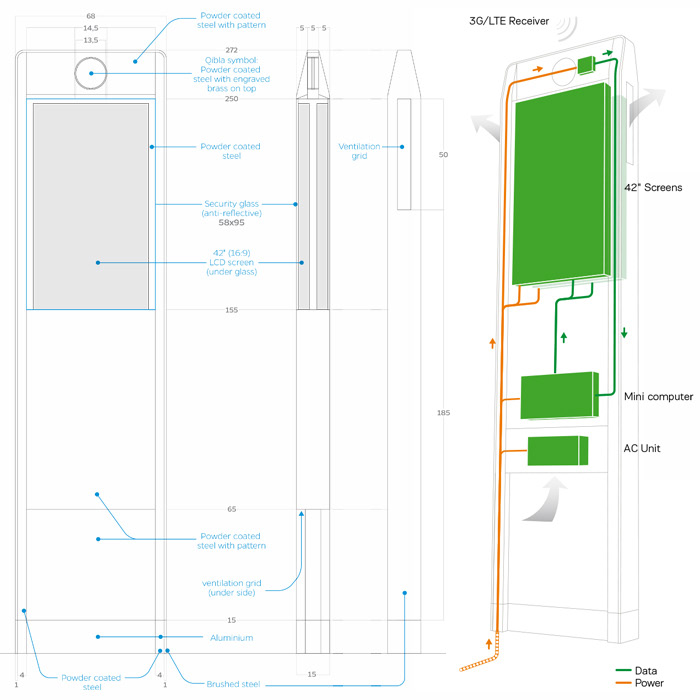 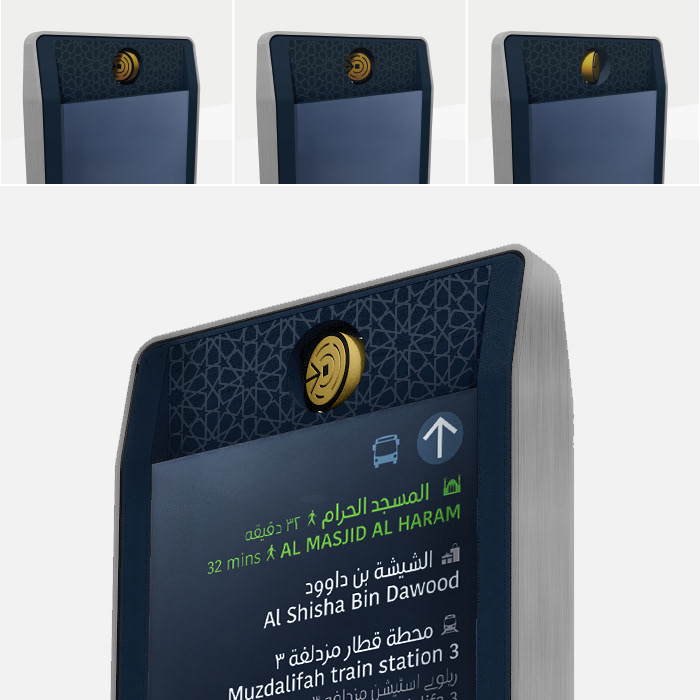 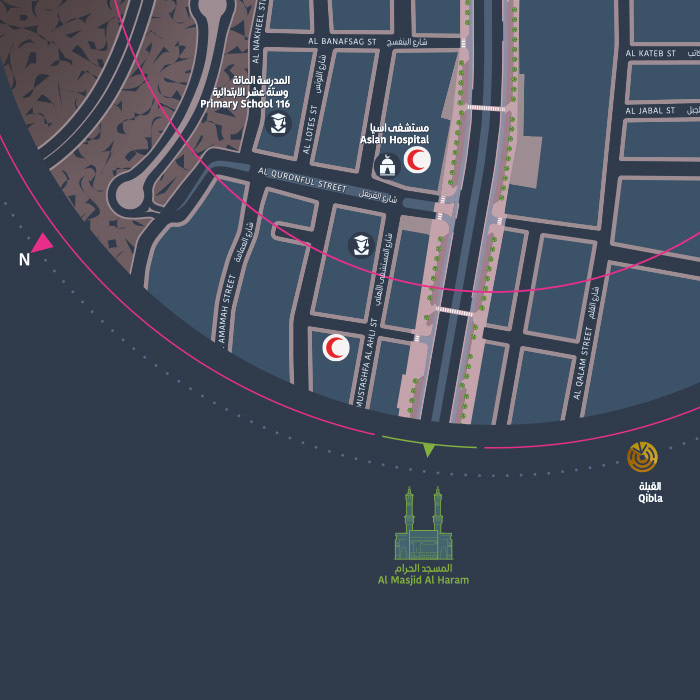 Street Totem and its revisions
If the wayfinding strategy is the brain of this system and it is what makes this solution reap its benefits, the street totem is its body and face, which the users will be in touch with it, and communicating with. It also, the foremost element of this system that cohere with other features of the city's identity. 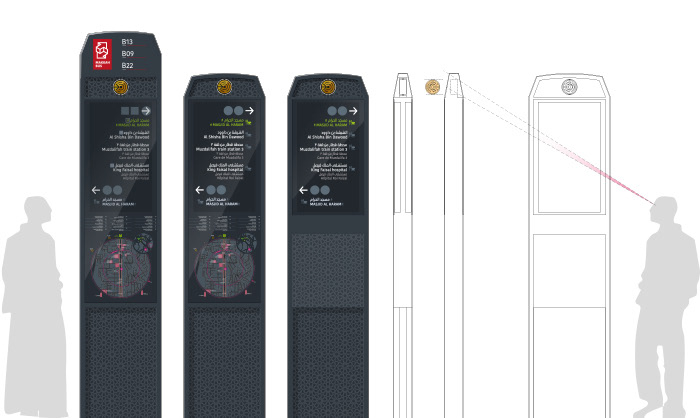 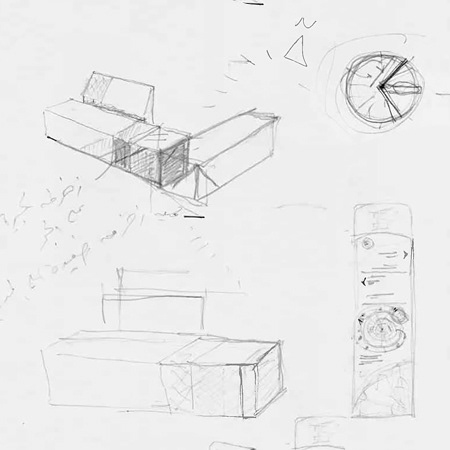 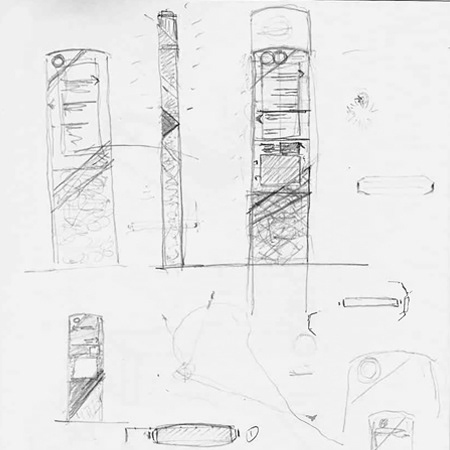 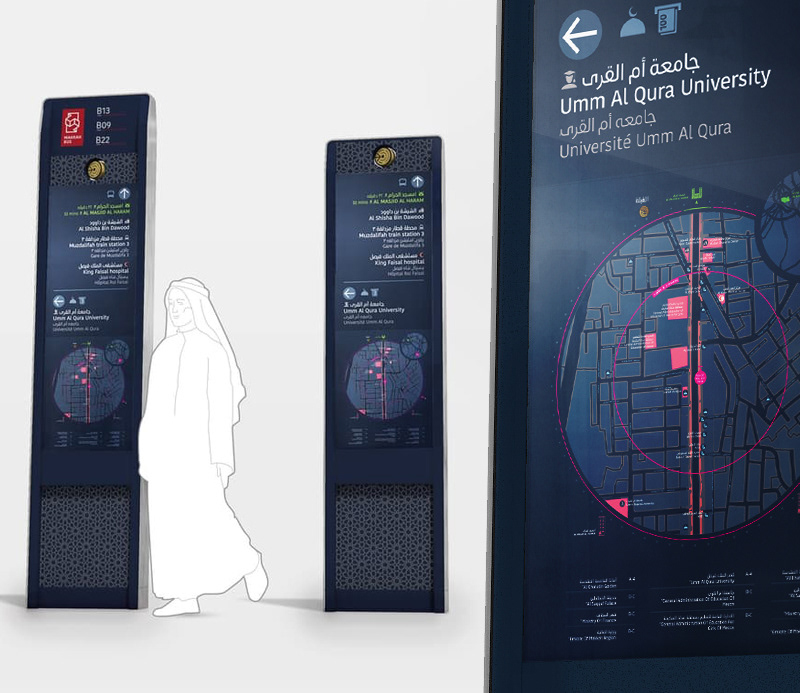 The Identity
The main differentiator of Makkah City is that it is the "qibla" for any Muslim, who should be facing Makkah in every pray practice. Therefore, giving the system the name “Qibla” was a clear differentiator by itself, moreover, the word “qibla” in Arabic means destination! And it is one of Kaaba's names. On the other hand, the directional arrow for qibla per se was the logo of the system, which located on the top of every street totem. It was designed to serve both -identity and direction. 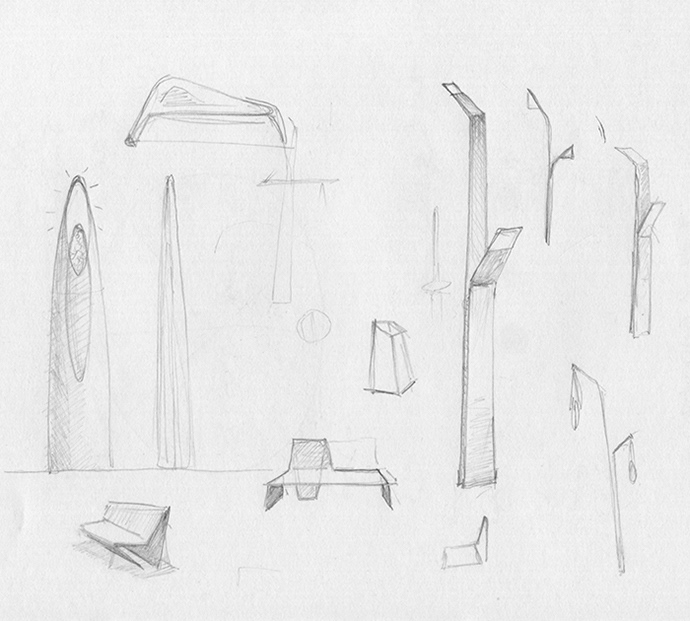 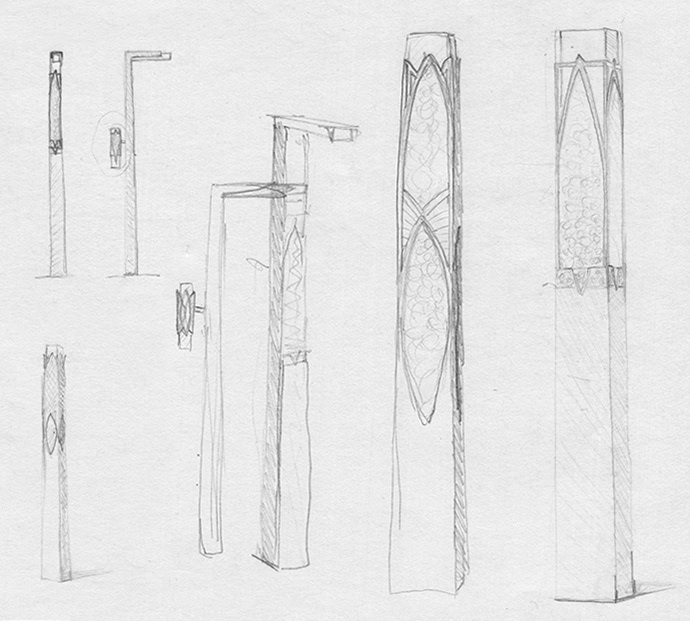 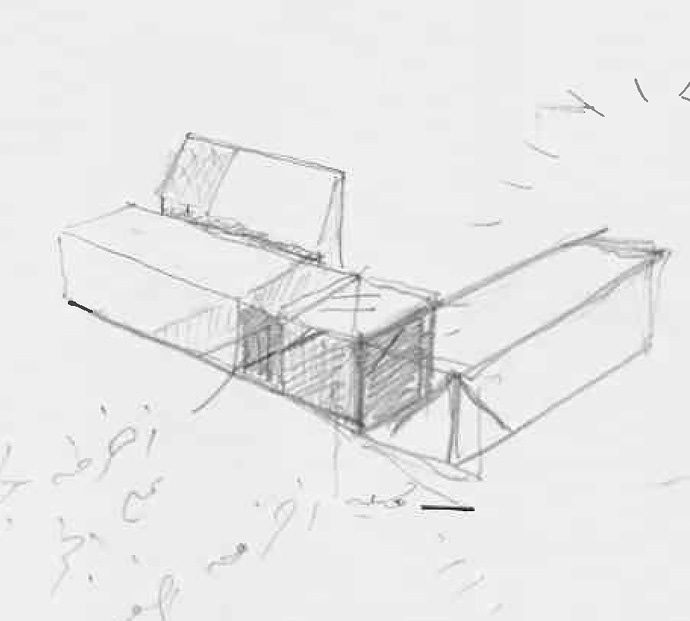 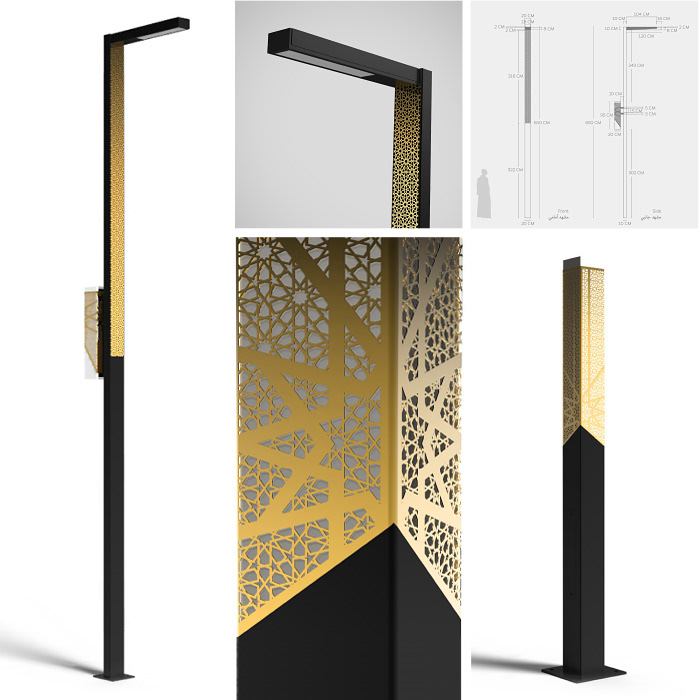 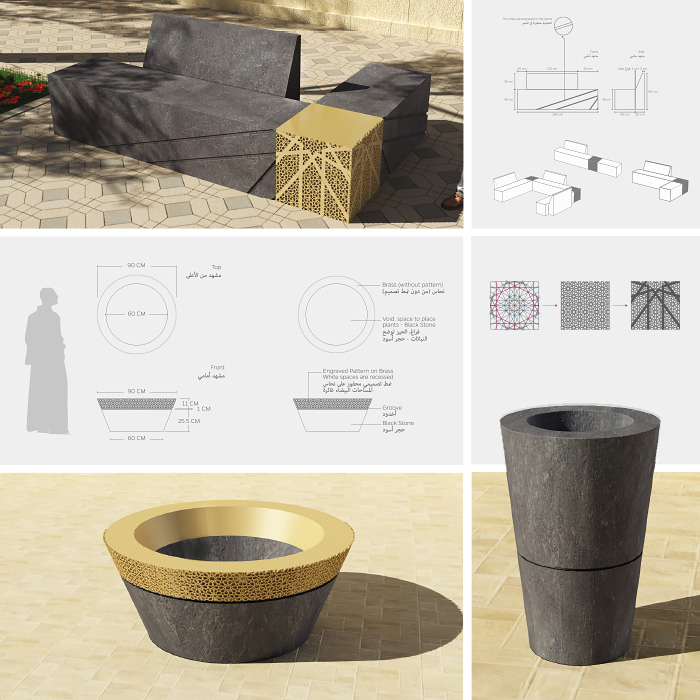 OnFoot Map Initiative
↑Back to Top